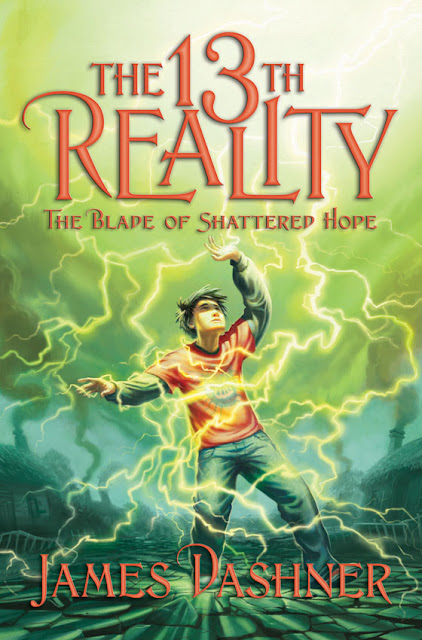 Here's a cover I just got done working on for Jame's Dahner's The 13th Reality. Cool? It was fun to do :) It was a bit of a rush ( when I say a rush, think, 2 days ) because I did a completely different cover over a much more reasonable schedule, but as fate would have it the 1st cover went all the way to the top and was thrown out -- well maybe "thrown out" is to harsh because I think the plan is to use it inside, but it was decided that we needed a different direction.  I'm grateful to the Shadow Mountain team that they asked me to the second cover. Often if the 1st get's the axe, the publishers will throw the baby out with the bathwater and hire a different illustrator.  So, thanks for the second chance Shadow Mountain.
Later :)
at 8:29 AM

I like it. It's... Eh, different from most of the stuff you do. It's good, but you're best I would have to say are the covers for the Wednesday Tales. The had a more curve to them that just made it more fun and whimsical. :-)

Quit bragging about how fast you are at book covers.

I have a weird love of lightning on book covers so loved this! Would be interesting to see the other version too.

I love 13th Reality and I love your art! It's really nice to see them come together.

As always a success!

Thats great news to hear they kept you on the project. I like it. Much better work than I could do in two days. Great job.

Fantastic Job! Always good to change things up-- and I love your back-stories about the logistics and industry. Pretty sure I could ask you "too many" questions :)

Brandon,
Ive been waiting for this book to come out for a while and was thrilled to see that they choose you to illustrate it! We had you on our site last year and you were a pleasure to work with and one heck of an artist! Keep up the great work, as I am looking forward to seeing your stuff for quite some time to come!

amazing you can do that in a couple day!! i'll show the boys. :)